The end of a season

Today is July 31st.  The end of my time being a full-time stay-at-home-mom.  My part-time teaching contract starts tomorrow.  (I don't actually have any responsibilities scheduled until next Thursday, but something could pop up starting tomorrow).

Part of me is regretful.  I look back at all I accomplished and think that I should have done so much more.  I never really dove into the preschool curriculum, I never worked with Blaise routinely on his reading, I never did arts and crafts with the kids.  It's easy to see my failings.  But I am thankful for the time.  I know that on most days I really did try my best and accomplished many intangibles.

Part of me is sad.  Lucy is about to turn 2.  Not only am I ending my time as a SAHM, but I'm ending the baby phase of my life.  She can run, she can talk, she can play pretend with her brothers.  Our baby days that I thought I would never survive and would never end are done.

For I know the plans I have for you,” declares the Lord, “plans to prosper you and not to harm you, plans to give you hope and a future.  ~ Jeremiah 29:11

We have this hope as an anchor for the soul, firm and secure. ~Hebrews 6:19 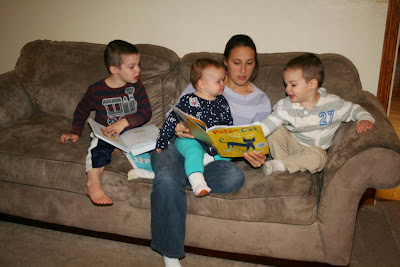 It's been a long time since I've taken part in What We're Reading Wednesday, but I have been reading!  In the spring, everyone was talking about Jennifer Fulwiler's book, Something Other Than God.  I had to miss the initially rush because I don't buy books and wait for the library to get it in.  Thankfully Notre Dame decided to buy the book, so my wait was pretty short.

I enjoyed the book and found it engaging.  I didn't necessarily find it compelling for why I'd want to become Catholic.  But as someone's personal conversion story, it was good, maybe 4-star good.

But it did get me thinking and so I checked out a book that was helpful when I first started considering Catholicism many many years ago - Born Fundamentalist, Born Again Catholic.  Although I'm not a fundamentalist, much of the book speaks directly to issues that I have in considering the Catholic church.  Currie writes for the protestant reader, so his arguments are straightforward and use language that is familiar to protestants.  His arguments are also very well researched and laid out.  Although the book does tell his conversion story, it is not really a personal story.  It is based upon intellectual discoveries.

Each chapter addresses a different area of Catholic doctrine that protestants (specifically fundamentalists) have disagreements with.  Currie starts with Communion and the Real Presence.  I've always had the sense that Catholics have it right when it comes to the Eucharist, so this chapter is a good refresher of why that is so, focusing on the scriptural evidence.  His next chapter deals with the idea of "sola scriptura" and how that itself is not scriptural.  He makes a convincing argument against it, which sets the stage for arguing the rest of the points in the book.  Of all the conversion literature I have read, this is by far my favorite and the most convincing.

Since I was enjoying this genre of conversion stories, I decided to get a Scott Hahn book next since he is pretty much the spokesperson for protestants becoming Catholic.  I picked up Rome Sweet Home.  My feeling about this book was just "meh".  I disliked the way it was written with back and forth between Scott and Kimberly.  Although I appreciated getting both of their stories, I thought it made the story more difficult to follow and sometimes things were repeated without adding any additional insights.  Also, I just didn't think Scott and Kimberly did as good of a job explaining their reasoning as Currie did.  Now I know the Hahns have many more books, so perhaps in the future I'll give a different one a try.

I've been wrestling for quite some time now with the reality that satan sometimes wins.  In fact, he wins a lot.  Sure, God wins overall.  God wins the war.  But satan gets a lot of the battles.  Some people are uncomfortable with the idea of satan.  I used to be that way.  If you are, just sub the word evil, instead.  But however you phrase it, the bad side gets some victories.  What I have to force myself to accept is that even though evil is present, God can and does bring good out of all things.

But it is so hard to live in this broken world.  To live in a world where children have no families and social workers just tell us to have patience.  I see satan all over in the bureaucracy of the foster care system!  And I know that God brings good.  I know that He is teaching us patience and He is teaching us to have even more fire and compassion for the children in the system.  And I pray constantly that He is working in the heart of my son(s) or daughter(s) in the midst of their circumstances.  But really, I'm pissed.  My child is most likely living in a group home (the nice way of saying orphanage here in the U.S.) not knowing that they have a family yearning for them.  Getting another year older without me.  Without being a part of a family.

Sometimes people try to comfort us by saying that it is all in God's timing.  I have a hard time wrapping my brain around that.  How is more time in an orphanage better?  God allows bad things to happen.  I get that.  It's all part of our free will.  But I don't believe that our loving and just and merciful God causes bad things to happen.  And I see so much of this waiting in adoption as a purely bad thing.  And this is not just about my personal adoption.  We have friends who went through the training classes with us.  They are fully approved by the state and yet are still waiting.  There are 100,000 kids in the U.S. waiting.  There are parents waiting.  That is not God.  That is satan.  I trust that God is bringing good into this situation, but it is not God's perfect timing.

Satan wins when people tell us how amazing it is that we are adopting and how they could never do it.  Satan wins when children grow up and age out of the system with no family because people think that it is someone else's calling.

I have more to say, but Lucy has just awoken from her nap.  I guess I just want to say that satan is real and evil is real and if we are not actively working for good and working to be God's hands here on earth, then we are giving satan an even more victories.  It's not just about adoption, obviously.  But just look at these kids.
No comments: