How I met my husband

I met my husband through a series of coincidences that I believe God orchestrated.  I've shared the story many times in person, but I'd love to be able to have it all written down.  This is the part of our story that leads up to our first meeting.  To see what happens after our first meeting, you can read my Valentine's Day post.

To understand fully, you need to go back to my sophomore year at MIT.  After floundering a bit my freshman year with my new found freedom, I was starting to get my act together.  I joined the Christian a capella group and one day after practice I was sitting on the student center steps when I started to sing a song that I hadn't heard in quite some time.


Oh God, You are my GodAnd I will ever praise YouI will seek You in the morningAnd I will learn to walk in Your waysAnd Step by step You'll lead meAnd I will follow You all of my days

This song immediately took me back to my days at summer camp and I realized that I wanted to go back there.  After a little researching, I applied to be a camp counselor and was accepted.  Around this time is also when I realized that mechanical engineering really wasn't for me and began to consider teaching.

At the start of the summer we had a week of training and during that time I got to know one of the male counselors.  I was smitten.  Here was a strong man of God, who had a passion for working with kids.  What a change from the shallow men I seemed to attract at MIT!  And how romantic to meet at summer camp!  So very many happily married couples had met this way before us.  From the start my parents had a distaste for him, but we dated long-distance through the rest of my time at MIT.

I graduated from MIT with a degree in Mechanical Engineering and a teaching certification in high school physics.  I had two job offers, one from a nice, public, middle-class high school in a Boston suburb, and one from a start-up school for low-income students in inner-city Cleveland (where my boyfriend lived).  Obviously my parents wanted me to pick Boston, but I went to Cleveland.  My relationship started to deteriorate shortly after moving there, but my job was a perfect fit for me.

Teaching at St. Martin de Porres really opened my eyes to the world around me.  I worked with a small group of teachers and administrators who were passionate about social justice.  And the students were just incredible.  Through working there I came into my own.  I discovered my passions and how God could use those.  My relationship officially ended a little over a year after I moved to Cleveland.  It was for the best, and although difficult, I bounced back rather quickly.

Immediately after the breakup, all of the teachers were sent on a professional development trip to visit various Cristo Rey schools around the country.  (St. Martin, where I worked, is also a Cristo Rey school).  Despite my knowledge of Boston, for some reason I was assigned to Chicago.  The two other teachers who went with me to Chicago had connections to people there, so we extended our trip through the weekend in order to have a little downtime.  For the weekend, I went with my co-worker Andy, and stayed with his friend Steve.  9 months later, Steve would introduce me to John, my now-husband, at Andy's rehearsal dinner.

In the interim, a few more things had to fall into place to make that meeting possible.  First, I needed to move on from my relationship and get a better understanding of what I was looking for in a spouse.  So I signed up for eHarmony and started dating!  I met some wonderful Christian guys, built up my confidence, understood more how I should be treated in a relationship, and got a sense of the type of person that would make a good match for me.

Secondly, God needed to get me to California to Andy's wedding to meet John.  Initially, I was supposed to be going on a family vacation to Hawaii at that time.  For my high school graduation, 6 years prior, my family went to Hawaii and we had always said that we would do it again for my brother's graduation.  But as we sat down to plan it over the holidays, it just didn't seem as alluring the second time around.  My mom pulled out a book she had about the ten best domestic travel destinations, or something like that.  We settled on Northern California.  Only then did I realize that we could weave Andy's wedding into the vacation plans.

I was nervous to go to the rehearsal dinner as I only knew a handful of people, other than the groom, and I only knew them from that weekend visit to Chicago.  For dinner, I sat down next to Steve and John sat on the other side of him.  We all talked over dinner, and then after the meal Steve left and John and I continued to talk.  There was such a ease to our conversation.  I had butterflies in my stomach the whole night and couldn't wait to see more of him the next day!

John was doing music for the wedding and then we were seated at different tables for the reception, so I didn't get to see much of him.  Although we did spend some time talking and dancing, which is where this picture of us comes from. 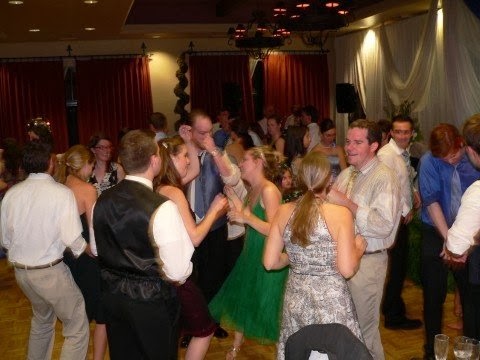 After the reception, lots of the guests were staying at the same hotel, so there was a bit of an "after party" in the pool.  John and I have very different memories of that party... I felt like I was giving him tons of signals that I was interested, but he remembers thinking that I wasn't interested at all!  I was so excited when he asked for my email address, but he remembers thinking that I gave it reluctantly!

Early the next morning it was time for my family to head to our next destination.  I was really hoping to run into John at the hotel breakfast, but I didn't.  I was already thinking that he very well could be the man I married :-)

I feel so blessed looking back at just how many things had to fall into place for me to meet John.  Neither John nor I like the concept of "soul mates" or "the one", but we can't deny that our meeting has God's fingerprints all over it!

The rest of the story can be found here if you haven't already read it!

Email ThisBlogThis!Share to TwitterShare to FacebookShare to Pinterest
Labels: About, Family