1.  Growing up I never understood about Catholics giving stuff up for Lent.  The Catholics I was friends with just complained about it and when I asked them to explain the reasoning, they couldn't.  I even remember a time in college when I asked a friend about why she didn't eat meat on Fridays and she said she didn't know, but that's just what you were supposed to do.  All of this left me with quite the distaste for Catholics because they all seemed to just be blindly following rules, thinking that somehow it made them closer with God.

2.  At my first teaching job after college at St. Martin de Porres, I finally met a whole bunch of strong Christians who also happened to be Catholic!  I started to see the reasoning and the value behind the traditions.  Lent would be a time for joining in Christ's suffering and for drawing closer in our relationship with God.  At St. Martins it was easy to make some change for Lent because typically the priest there would make some suggestion.  I particularly enjoyed the year he offered to meet with us individually to lead us through some spiritual exercises.

3.  Since I'm married to a Catholic, we have often tried to do things together for Lent.  Once we gave up caffeine, which was much harder for my coffee drinking husband than for my tea-loving self!  Last year we gave up TV, which proved challenging, but freed us up immensely to focus on our relationship with one another and with God.

4.  My primary goal for Lent this year will be to pray the rosary daily.  Before yesterday I had never ever prayed the rosary.  But I gave it a shot during nap time, and I think it's definitely something that would bring some peace and focus to my day.  It also gives me a time to remember all those I have promised to pray for, especially the children that my heart aches for.

I'm also motivated because I recently bought a beautiful handmade rosary!  Cari @ Clan Donaldson had done a series on artists during advent and that is where I was introduced to Allison's work.  I followed her on instagram, where she shows her latest creations, and pounced when I saw this rosary! 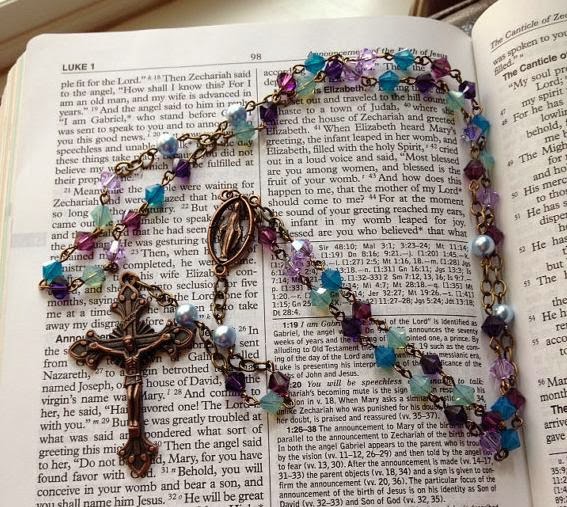 5.  I also think that I'd like to set a bedtime for myself and stick to it.  With the Olympics I've been staying up much to late each day and it is definitely affecting my moods during the day!  Unfortunately I'm one of those people who functions  best on 9+ hours of uninterrupted sleep, which is just such a nuisance when you have kids!  So I'm thinking I need to enforce a 10 pm bedtime for myself during Lent!

6.  Finally, I think we'll be going vegetarian for all of Lent, just like we did for Advent.  It's good to simplify!

7.  For other ideas on what to give up or include for Lent, Kendra @ Catholic All Year had a great post  full of ideas.