1. This is my first time attempting a structured blogpost!  I think these quick takes will be a good way to record some of the stories of our daily life that are just a little too long for a facebook status.

2. Yesterday while the kids were eating lunch, I snuck away to have a little alone time (a necessity as an introvert!).  After a few minutes I hear Finn screaming that there is bread up his nose.  I don't see anything, so I reassure him that he is fine and that nothing is actually up his nose.  He says OK, but then a few minutes later starts crying and poking at his nose.  Upon closer inspection, there is a huge chunk of bread way up his nostril!  Thankfully I was easily able to remove it with a pair of tweezers, but that was certainly a parenting first for me!

3. Blaise has started speech class on Mondays at a local elementary school.  Because I care way too much about what others think, I make sure to comb my hair and put on makeup and dress nicely.  The classes are 30 minutes long, which really isn't long enough to go anywhere with the little kiddos while we wait.  This week, I noticed that there was a path leading through the woods behind the school.  Our kids love to "hike", so we went for it!  Boy did I yearn for my sneakers while we were traipsing through the mud and poison ivy!

4. I sent John to the store for pumpkin ale, and he came home with this. At first I was a little disappointed that it wasn't pumpkin, but at least it was seasonal. Turns out, it is delicious! I highly recommend :-) 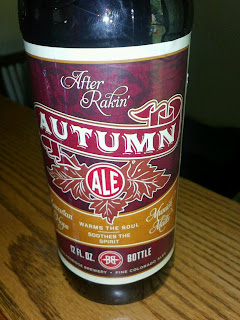 5. I'm finally getting brave enough to leave the house alone with all 3 kids! Last year I did it at most once a week. This week I did it three days in a row! Speech on Monday, playgroup and a walk on Tuesday, and library storytime Wednesday. Although my extroverted children, Blaise and Lucy, really enjoy this faster paced schedule, I think Finn and I need a couple days off!

6.  About a month ago we had Blaise's IEP meeting to discuss his speech.  One of the things the teacher strongly suggested was that he give up the pacifier.  He only used it for timeouts, nap, and nighttime, but he was addicted!!!  I decided that the easiest way would be to cut off all three kids cold turkey.  Finn and Lucy adjusted almost immediately, but Blaise took about a week.  Even after he stopped asking for it, he still had trouble calming down during timeouts without it.  Today he calmed down almost immediately in time out.  What was the magic trick?  Apparently his footy pajamas are his new security object.  He was putting them  on when I walked in!

7.  My tablet was the worst technology purchase ever.  It started acting up at about the 9-month mark.  Still under warranty, but it cost $15 to ship it for repair.  Then it stopped working again.  Another $15.  And now it is acting up again.  The best part is that it mocks me.  This is the startup screen that I see repeatedly as the computer randomly restarts over and over again:

"Persistent Perfection".  Oh, ASUS, your humor is not appreciated!